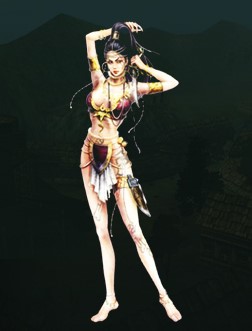 Legend has it that Sura Mahu, The Mistress of Chaos, was immaculately conceived by an elderly woman, in her late seventies, who worked as a maid for a noble family in a small village outside of Guangzho Province. The women of the house were frightened by the seemingly impossible pregnancy and soon became convinced that the child, although quite beautiful, was possessed by demons. Though the maid pleaded for them to spare her daughter’s life, it was decided by the male head of the household that the child must be drowned. A small golden bathtub was filled with freezing water in preparation. Sura Mahu was torn from her mother’s breast by the master and quickly held beneath the icy water. Miraculously, to the astonishment of all present, the child did not drown. The master called for the local apothecary and demanded he brings his most potent poisons. He ordered the child force-fed all manner of fatal herbs and venoms, but the child again suffered no injury.

Frustrated, but greedy, the master decided he would exploit the child’s immunity and charge admission for other noblemen to try their hand at murdering her. This was his fatal flaw, for word quickly spread North from mouth to ear through disciples of The Heavenly Demon Clan to The Emperor Heavenly Demon himself.

Heavenly Demon arrived in the village and his men surrounded the nobleman’s home. Cowering in fear, the master was forced to attempt again to drown Sura Mahu, and when the child smiled up through the water at Heavenly Demon she instantly won his heart. The order was given, all members of the household were murdered, and the house was burned down.

Heavenly Demon took the child Sura Mahu with him back to his fortress at Mount Yanmo. There she grew to adulthood, believing herself to be merely a rescued orphan, and mastering many of Heavenly Demon Clan’s sinister Kung Fu and Chi Kung techniques. On the day set to be her marriage day to The Emperor, she was visited by a wandering hermit, who told her the real story of her birth. Realizing that The Emperor had needlessly slain her mother, Sura Mahu confronted him and was given two options: Marry him or die. Sura Mahu fled Mount Yanmo with a battalion of disciples in pursuit. With no place else to go, she made for Song Shan Mountain and knocked at the Temple Gates of Shaolin.

She was greeted there by Fachang, Shaolin’s elder, and she knelt before him, begging entrance. Fachang listened to her story, observed her excellent skills, and offered her a blessing and an apology, for he could not grant access through their gates to any woman, not even one as talented as she. “But the Emperor will kill me!" she said. "Where is your great Shaolin mercy?” To which he replied, “My mercy, child, is not so great as this karma which grips you.” With that he bowed and closed the temple door.

Caught between an evil man who wanted to marry or kill her, and a supposedly kind man who denied her safe haven, despite her ability, simply because of her sex, Sura Mahu vowed that she would survive and change the world. She murdered the first monk she came across and stole his robes, then shaved her head and walked back down the mountain, disguised. She passed right by Heavenly Demon’s patrols unnoticed. Once safely away, Sura Maru proceeded to found her own clan, the order of The Sacred Flower.

Her disciples do not believe she could have fallen to a man’s hand at the final confrontation of The Nine Dragons, and that she is alive out there somewhere, merely allowing the world to falsely perceive her as dead.