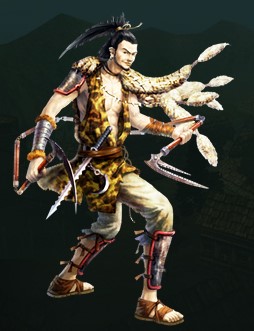 The Brotherhood, so legend has it, was originally a dream shared over a campfire by two men, Ji Longfeng and Ma Taichun, aided by a stolen bottle of wine…

Ji Longfeng grew up in an orphanage in a small village at the base of Mount Tai Shan. It was said that his caretakers were dishonest and were often abusive. So, Ji Longfeng would pay any wandering warrior he could find to teach him Kung Fu with money he had stolen from the collection box. By the time he reached young adulthood he had mastered several styles of Kung Fu, and so he attempted to enter Shaolin. He was offered discipleship but turned it down once he truly considered what would be required of him. He felt wine, women and meat were gifts given by God, and he was also a believer in Confucianism, not a follower of The Buddha.

Later, while on one of his many adventures, he discovered a secret manual written by a man named General Yue Fei during the Song Dynasty. Ji Longfeng recognized the truth of the principles transcribed within the manual and The Six Harmonies were revealed to him. Combining Six Harmonies technique with his spear skills, Ji Longfeng became a great master, and earned the title “Divine Spear”. Claiming allegiance to no clan, and disgusted with the ways of The Imperial Emperor, who was reportedly taxing his Province to death, Ji Longfeng set up his camp on rural Mount Tai Shan, where no tax collector dared to venture.

One night he heard a commotion near his campsite and saw a man being pursued by a dozen mercenaries. Thinking the odds unfair, Ji Longfeng interceded, and quickly sent the mercenaries fleeing. The man he rescued was Ma Taichun, a man who had lost his farmland to the tax collectors and had become a thief with a price on his head. Over the course of several weeks, the two became friends. Ma Taichun told Ji Longfeng that the tax collectors had grown so greedy that there were now more wanted men than honest men left in his village. This troubled Ji Longfeng considerably, and so one night, sitting by the fire, they drank a bottle of wine that Ma Taichun had stolen, and created The Brotherhood.

Before a week had passed, they had over a hundred men camped atop Mount Tai Shan. Soon after, Ji Longfeng led the first attack on the corrupt officials and their tax collectors, defeating their highly trained mercenaries. Though the Imperial Emperor quickly sent reinforcements, forcing Ji Longfeng and his men to retreat to the mountain, their attack gave hope to the ordinary people whose lives had otherwise become hopeless.