Characteristics of a Storm vs Storm Battle Print

Storm vs. Storm refers to a power struggle between the Hero Bands for their possession of neutral territories, called Fortresses. These conflicts occur because the Hero Band occupying certain Fortresses can charge trade taxes on all items traded in that area. 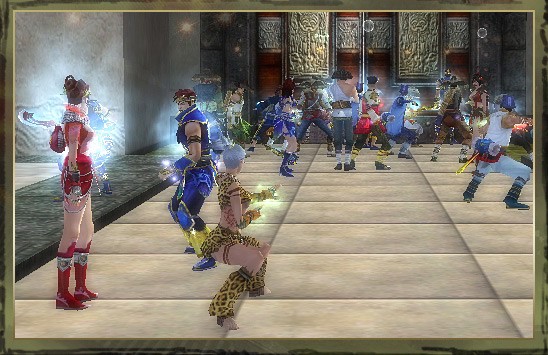 To challenge a Fortress, certain fees need to be paid to a Fortress Guide and receive authentication.

During the SvS Battle, the commander’s chat message will be displayed in a separate window.

Some significant status effects for the SvS Battle will be given to the defending / attacking players.

Prohibition of Lightfoot during SvS Battles

The Lightfoot is prohibited during the battle, to limit malicious activities.

Coma during the SvS Battle

This is a penalty system whereby a user of a higher level will take a longer time to be revived.

Mini-map during the SvS Battle

When a user approaches the Fortress during the battle, the mini-map will be expanded by four times. The locations of the Hero Band members will also be shown on the enlarged map.

This displays the record of PvP battles with other Hero Bands.

This records your PvP records whilst in SvS Mode temporarily. This record will be reset when the current SvS Battle finishes.

Your reputation will not go down when you are killed via PvP during the SvS battle.

The winner of the SvS battle will be publicly announced.

The possessing Hero Band takes a small amount from the challenge fee paid by any other Hero Band that challenges the territory.

Certain tax is applied to the trades between Players and NPC. The possessor of the Fortress collects the tax.